A downloadable game for Windows

Note: This is a heavily work-in-progress version of the game that will be updated as time goes on. However, as the game is updated, you may be able to retain your existing save files. Any unresolvable file incompatibilities will be noted with each new version.

~ THE ODYSSEY OF THE NINE ~

It's like Etrian Odyssey, but it's also like Final Fantasy and maybe a tiny bit of Pokemon kinda?

Cirno finds herself in a strange new dungeon in the center of Gensokyo. There, she finds fellow friends and fairies alongside her, maybe the occasional human or other youkai, and a bunch of popcorn monsters! Having none of this inconvenience, she swears to resolve this mystery "herself" (read: with the help of her team.)

-> Up and Down: (Battle screen) Change currently selected ability

Update 0.1.4b: VERY quick bugfixes: The "Lifesteal" and "Recoil" effects (which appear on enemy skills late in Floor 2) no longer default to healing the user by 100 times the intended amount. Yes, this means the Recoil property now properly deals damage to the user. Fixed a bug that prevented you from removing equipment if the associated "bag" (spellcards/equipment/items) was empty. Made Mujinas a bunch weaker and appear less often. A WHOLE LOAD of enemy abilities were made between 4 and 12% weaker.

The Settings menu was implemented! You can now access volume sliders and window settings.

You now have the ability to open treasure chests, talk to NPCs, check your stats, edit your equipment, use consumable items (in and out of battle!), and you can now hold down buttons to continuously register their input! No more repeated clicking of the arrow keys to navigate around the dungeon.

In addition to this, the map was given a bit of a readability makeover, there's now a minimap display that's visible when exploring (nearby save points are added to the map automatically!), and the game saves your map data even if you close the game! Also readable now: Question prompts! You also aren't allowed to simply mash A on them, either, you'll get a buzzer noise if you try to press A on a question without scrolling into the answers.

In battle, elemental alignments of spells and targets are now taken into consideration.  Enemies now keep their cooldowns in mind (no more Nasty AoE Spam), and status effects exist now! Abilities that target already-defeated things are now rerouted onto living things, and difficulty settings do stuff now! The Lunatic difficulty is extremely difficult. You can hold down Y (or "C" on the keyboard) to autobattle, which will speed up the ATB bars and auto-input Attack on players' turns.

Next on my plate: Event scripting, spellcard evolution (That menu is currently inaccessible), Actual Portraits, and the actual implementation of a barrier on the second floor that you'll actually need to unlock.

Last note: IF YOU REACH THE STAIRS ON THE SECOND FLOOR ... they'll just take you back to the entrance of the second floor right now! 1F and 2F are all that exist at the moment. Thanks! 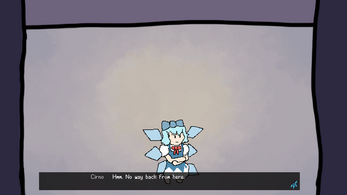 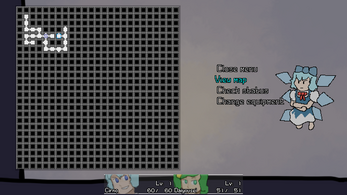 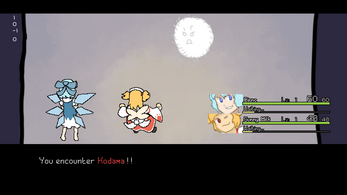